Student of the Month

Welcome to the Nevada Learning Academy’s Class of 2018 Commencement Ceremony. I would first and foremost like to congratulate you all on the hard work and dedication shown throughout the school year. WE MADE IT!

I listened and read many speeches so I could inherit their wisdom and be able to look really good up here; however, all of them said to be yourself and speak of things you learned. Well here are the three rules in life which I learned and hope to share with you today. Number one, never quit. Rule number two, dream big. Finally, rule number three, do something bold.

I am reminded of a speech by Denzel Washington that touched me in ways I’d never thought and therefore I would like to share that with you today:

“Falling forward means to fail, but to fail in a way that causes you to learn, adapt, and move on.” Here are some examples of that.

Thomas Edison conducted about 1,000 failed experiments. Did you know that? I didn't know that because the one thousand and first attempt was the light bulb. FALL FORWARD.

Reggie Jackson struck out twenty six hundred times in his career, the most in the history of baseball, but you don't hear about the strikeouts. Because people remember the home runs. FALL FORWARD.

I have faced the adversity of being a South American kid raised in a single mother household, being an immigrant, and even living at a shelter. Things which many people say no one can come back from, but instead I’m standing in front of you today as your Valedictorian and Student Body President. FALL FORWARD.

Don't only fall forward, but also dream big! We’ve been protected. We've been directed. We've been corrected. You only live once, so do what you feel passionate about. Take chances professionally. Don't be afraid to fail. There's an old IQ test which consisted of nine dots and you had to draw five lines with a pencil within these nine dots without lifting the pencil and the only way to do it was to go outside the box, so don't be afraid to go outside the box. Don't be afraid to dream big, but remember dreams without goals are just dreams and they ultimately fuel disappointment.

So, have dreams, but set goals. These goals are our foundation and rather than being proclaimed, they are in the conscience. This can be illustrated as follows, a carpenter’s main job is never seen. Digging holes to build the foundation is painstaking. Then you have to tie the steel, and after all that work was done, you pour concrete over it. And here's the thing. All that work was done and nobody ever sees it. No one ever speaks of the foundation. The only time you hear someone talk about the foundation is when a house is falling apart. But when the foundation is done right, nobody mentions it, and when it's done right, it can carry the weight of anything that it was designed to hold. Whatever you build has to be strong enough to support the weight of whatever you dream. And if you're like me, you are a huge dreamer. You have to have a foundation that is big enough, strong enough, and bold enough to hold all of your dreams and handle them coming true. It is a choice in the conscience, no one ever sees it, but you know it’s there and these are our foundations to success.

Someday we will all fail, but we must not be afraid. We will continue to fail, fail, and fail, but it doesn’t matter because there's an old saying that if you want to run, you first have to start walking. I have worked my whole life since coming to the States to be the best I can possibly be, I have succeeded and I have failed. I believe that my failures have allowed me to be here today. I have been denied to almost every single one of the universities I applied to, but I still know that I will go to college and be successful. To achieve the goals, you have set, you must apply discipline and consistency. Every day, we're just saying we don't plan to fail, without realizing we fail to plan. I might be walking today, but I can promise you that tomorrow I will be running.

Finally, I would like to finish off by once again congratulating you all on your hard work and dedication. I would like to thank the families of our class for keeping us on track. And I would also like to thank the teachers and administrators on being dedicated to educating the young minds of the future. I know my speech was long, but I hope the one thing I can leave you with today is that to get something you never had you have to do something you never did.

It’s crazy to see all of your faces up close like this, when for the entire second semester I was only seeing your names in live sessions and discussion questions. Well I know it sounds cheesy, but I kind of have to say it, we finally made it! Today I would like to tell you a little bit about my educational journey and the impact that NVLA has had on my life.

When I was attending a traditional brick and mortar school I would find myself going through the motions of an attentive student, but always felt that I was being silenced by my teachers. After answering one or two questions teachers never wanted to involve me in the discussion anymore because “other students needed a chance to participate.” NVLA was the first school where I felt that I had the complete attention of the teacher and was receiving positive feedback about my answers.

Similarly, the flexible schedule that NVLA offers has helped me so much in improving in areas where I am weak. At NVLA, if I was struggling in a certain area in math I could spend as long as I wanted practicing and mastering the subject, compared to at a brick and mortar school where if you didn’t understand something by the time your class was finished with it you were never going to learn it. NVLA has assisted me in filling some of the learning gaps that were left behind from previous schools I attended and filling them with knowledge that I can comprehend and use in real world problems.

When I first started NVLA this semester, I thought it was going to be a walk in the park compared to the other schools I attended, but boy was I wrong. Although the flexible schedule was great for taking time to master challenging concepts, it is a whole other story in regards to staying on top of all of your assignments. After slowly, and I mean like behind 2 months on work slowly, getting used to the scheduling I discovered that NVLA was preparing me for college. Now you may be asking yourself, how does doing work on a computer 24/7 help you get ready for college? By leaving the responsibility of staying on top of one's work to the student, NVLA is familiarizing us with the independence we need to succeed in college.

NVLA has completely surprised me by what they can do in such little time. Not only have they helped me mend the learning holes left by traditional schools, but also prepare me for life beyond high school. Now if I can stand up here after only attending NVLA for one semester and say that it has remarkably transformed my life for the better, I can only imagine the wonders that it has worked for you.

Thank you, and congratulations class of 2018!

I like NVLA because I get a better learning experience and a better understanding of what I am learning than in traditional school. I also like that NVLA is just online, I love that I can do school at any time and on my own time. I love how my grades have progressed and are better this semester in online school than last semester at traditional school. I am successful in French because my grandma speaks a little bit and it helps me get the right pronunciation of the language. Also, I take notes on the modules and make flash cards so I can have a good memorization of the lesson. This all helps me get good grades, especially the grades I’ve been wanting. I’m glad I switched to NVLA. 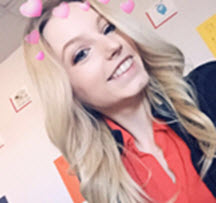 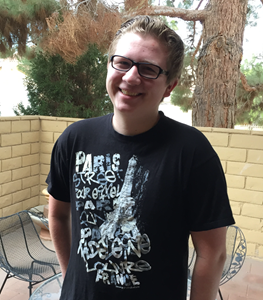 Hello, my name is Andy Quist, I'm a 15 year old who loves to read, play the Viola, build robots, and listen to Jazz. I also have two German Shepherds named Zeus and Chaos, 6 chickens name White, Dotty, Eagle Bird, The Twins, and Fuzzy Britches, and lastly, a fat cat named Boogs that fought off two Raccoons.

I chose NVLA because this online school was new to me. My parents and I wanted to try something different rather than go to a normal, average school where we had a lot of difficulties. This is my very first year in NVLA and I can tell you that I'm loving the amazing teachers who care about their students and will call them out of the blue to ask how they are.

I love the math class I'm in because of the great teacher I have, whose name is Ms. Winton. She checks in on me and answers any questions that I'm having difficulty with. I have learned more in her math course than in any of my previous schools, and that, on it's own, says something.

I actually became successful in math because of the learning environment, the wonderful teacher Ms. Winton, and I have a personal notebook where I write down important equations and definitions. Most of all, I slow down to a pace where I can read everything I write instead of rushing and "doing" the work. Those are really the four main reasons why I'm successful in math today.